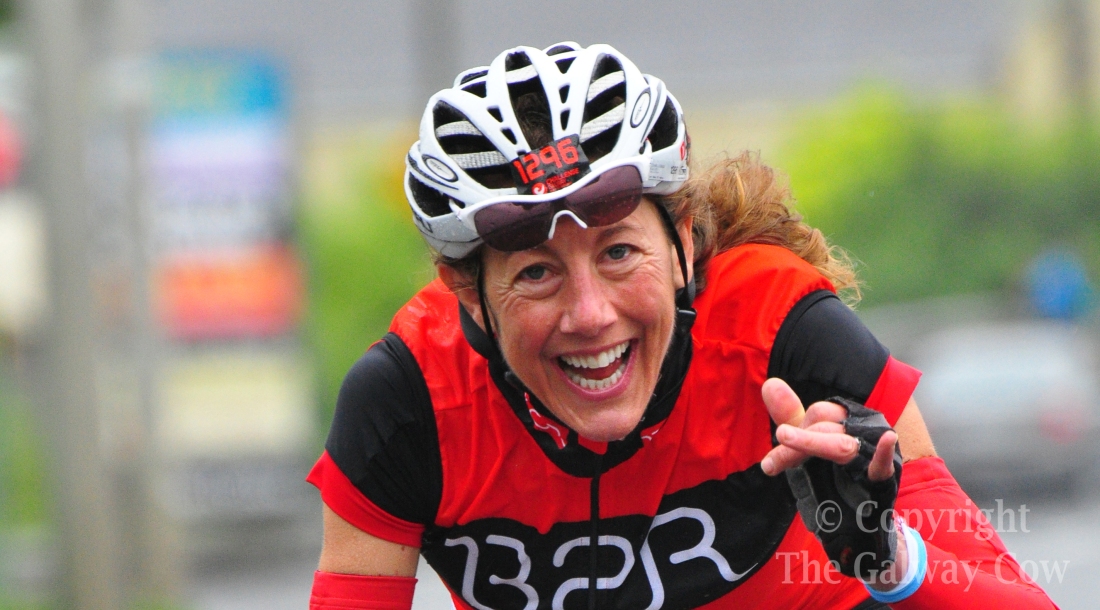 Like a sniper I was machine gunning photos all weekend at Challenge Galway’s triathlon events which took place on Saturday and Sunday. I took so many photos (viewable here), around 6,000 in total, that folk who have subsequently messaged my page are of the notion that there was a team of photographers working with me.

On Saturday there was three triathlon events in and around Renville which were a little shorter than the main events and I photographed participants getting into the water, coming out of it, cycling, and running.

Positioning myself on a wall, after the swim part, at a point where the runners and cyclists were coming towards me on either side of it, I spent several hours twisting from right to left, like a sniper with a fully automated weapon shooting everything that moved.

SD cards and spare batteries, like a gunslinger’s bullets, were loaded and unloaded with lighting precision and outstanding reflexes, the likes of which has never before been seen in the Wild Wild West of Ireland.

Veritably exhausted after day one’s event, and examining the route of day two’s full and half events, I realised it would be impossible for the one-man-army that is me to capture all three of the stages of this in any meaningful way. Two out of three would be the only laudable way of executing my plan. But two out of three ain’t bad, if you take Meatloaf at his word.  (If you don’t know who Meatloaf is, then don’t be sad, but do check out his song “Two Out of Three Ain’t Bad.” It is lovely).

I eventually managed to process all of the first day’s images at 3AM in the morning and had to be up at 5AM at the latest in order to find a good spot in Clarinbridge to get shots of the bike part of the next day’s event.

I spent an hour looking for an appropriate spot so as to make sure the background would give what I felt to be a pleasing backdrop to my images. Shortly thereafter, the first cyclist comes gliding through the early morning.

“You’re on, b**ch!” I say to myself, clicking my camera on and raising it to my shoulder, ready for action, but with a mild sense of trepidation. 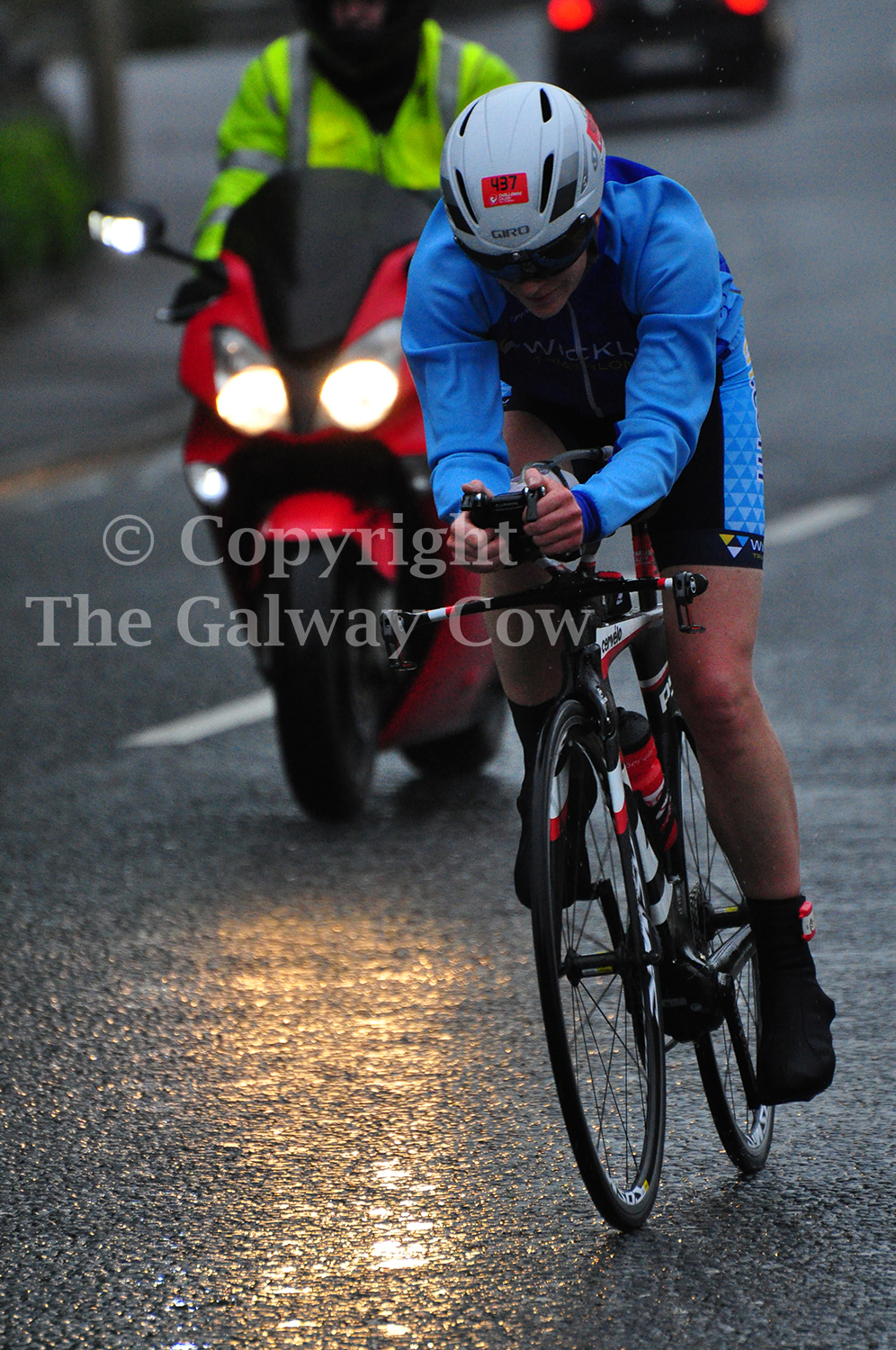 Trying to get a shot of every single cyclist in the manner which they deserve and doing it at high speed is no easy thing, especially when they come at you in groups. If someone is not in a pack then it is relatively easy to get a good shot of them, but when in groups you literally get one shot at it. Amazingly, many of my best pics of the day were snapped with such one-shot opportunities.

After 9, cold, soggy and starting to shiver and shake, my SD cards nearly exhausted, I crack off a few shots of a lady in red through my misted up viewfinder, and that’s when I hear it.

A melodious and pleasant sounding female British accent wafts through the air and fills me with such a sense of happiness that I momentarily forget about taking photos for I simply must see who this lovely voice belongs to.

Realising it is four times world champion Ironman winner Chrissie Wellington is the icing on the little cake of happiness that was immediately evoked in me at the sound of her dulcet tones. “Oh, it’s you,” I say, to which she laughs. Seconds later my focus is returned to the task at hand.

A while after Ms Wellington’s going by and having taken over 2,000 photos, I head home for a moment, and, like a triathlete urgently making the transition to the next stage, I clear my SD cards, and literally sprint into town to capture the run part of the race, and on the way in I capture a few of the first returning cyclists.

For the run photos, I have carefully chosen a spot along the old long walk and get into such a mechanical rhythm of taking photos that I do not even see my friend Gavan, who I wrote about here, as he comes towards me calling out my name.

Believing I missed the chance to photograph him, I run along ahead of him and unwittingly catapult all of my camera bag contents into the air. SD cards, lens covers, lens wipes, the lot. I failed miserably in my attempt to capture him, or so I thought.

The fact is that I, in my sleep deprived state, had already captured him without realising it. And it looks as if he was finding the run so easy that he decided to do it with his hands tied behind his back. This is a man who likes a REAL challenge, you see.

Realising that all of the runners will be doing at least two laps of the run course I decide to walk the length of the run route, so as to have a different background for their photos if I happened to capture them more than once.

Pain and struggle is etched across the faces of most of the contestants at this point, but miraculously many of those that spot me with my camera somehow manage to flash me with some of  the most heavenly smiles I have ever seen.

These people are heroes in the most divine sense of the word, and I don’t think that is an exaggeration. It is an easy thing to smile when you feel well rested and good, but it is something else entirely to do it when every sinew in your body is on the verge of snapping. 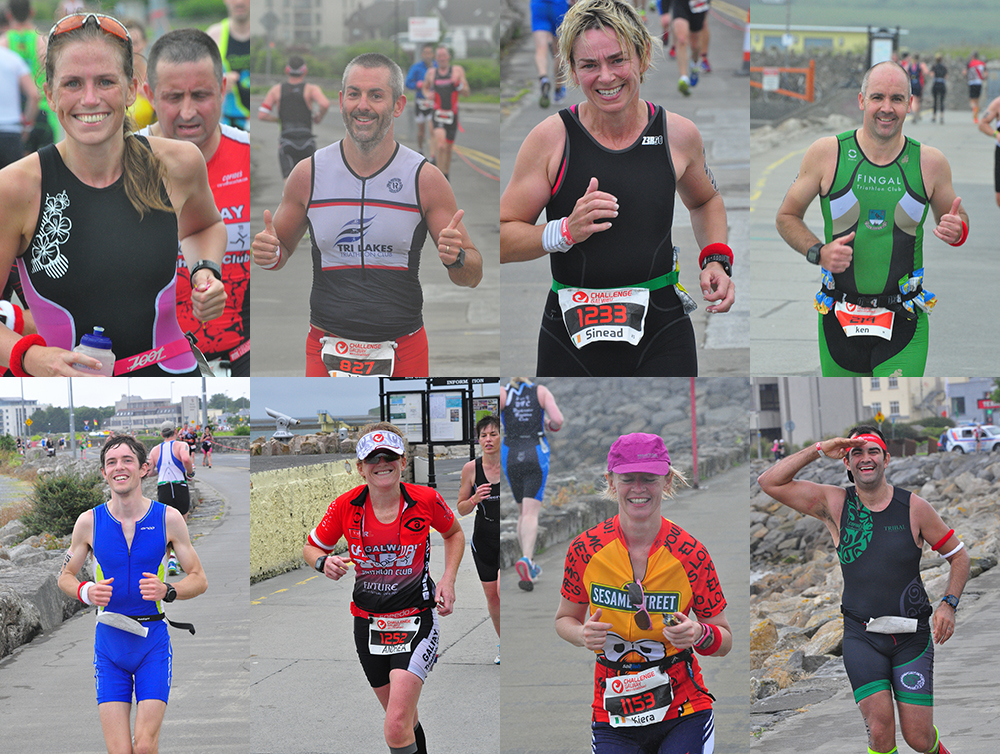 At Blackrock diving tower, between 2-3pm, my SD cards are almost full and so I resolve to call it a day.

Frazzled by the time I get back as far as Lough Atalia, the endurance athlete in me decides to capture a few of the returning cyclists, much, if not all, of whom, will be coming to the end of the full event’s 100 mile cycle and are now facing a 26.2 mile run.

One of my last captures of the day is this chap here and his antics make me snigger uncontrollably in the fashion characteristic of someone over-caffeinated, dehydrated, and sleep deprived. 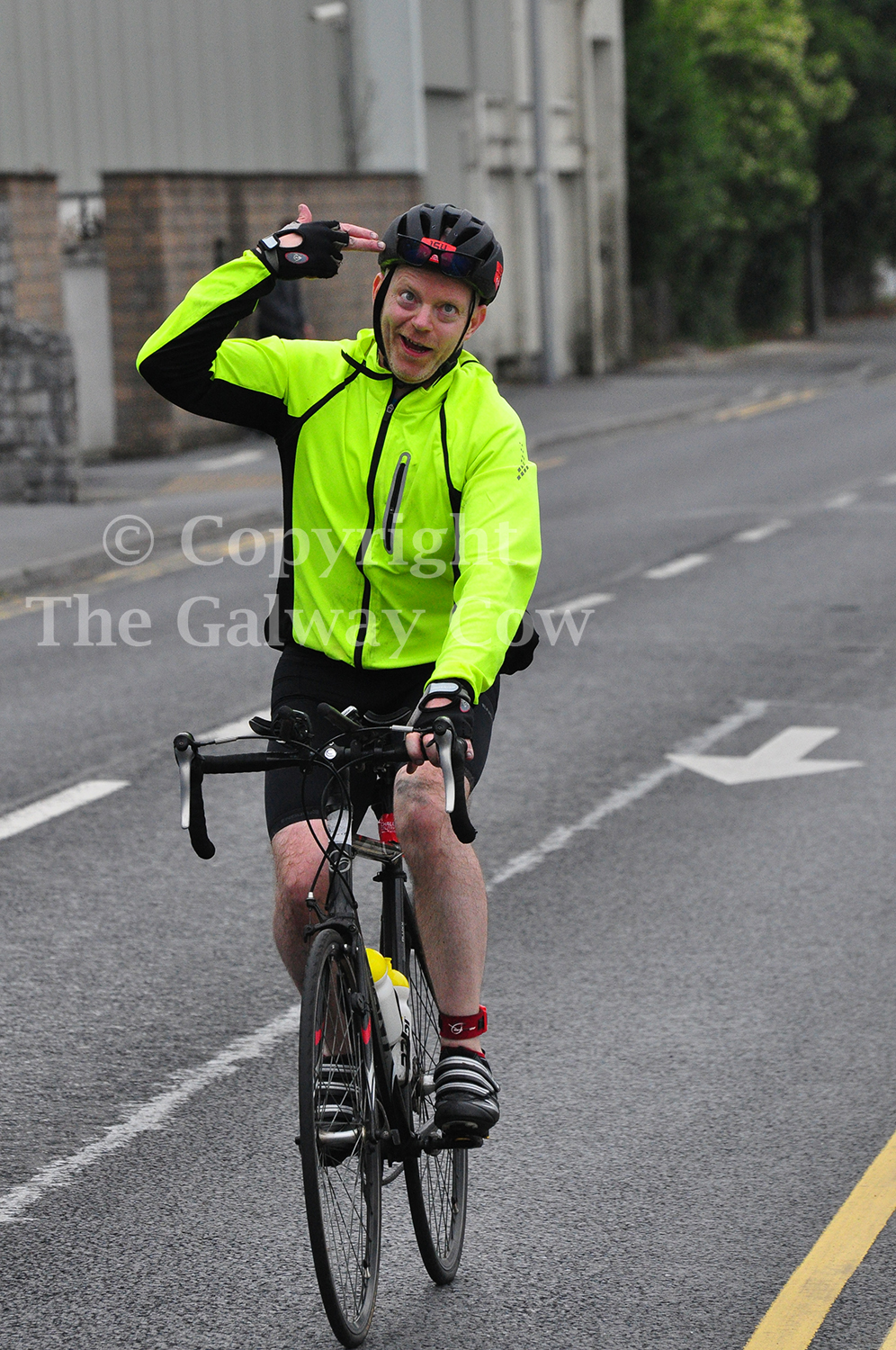