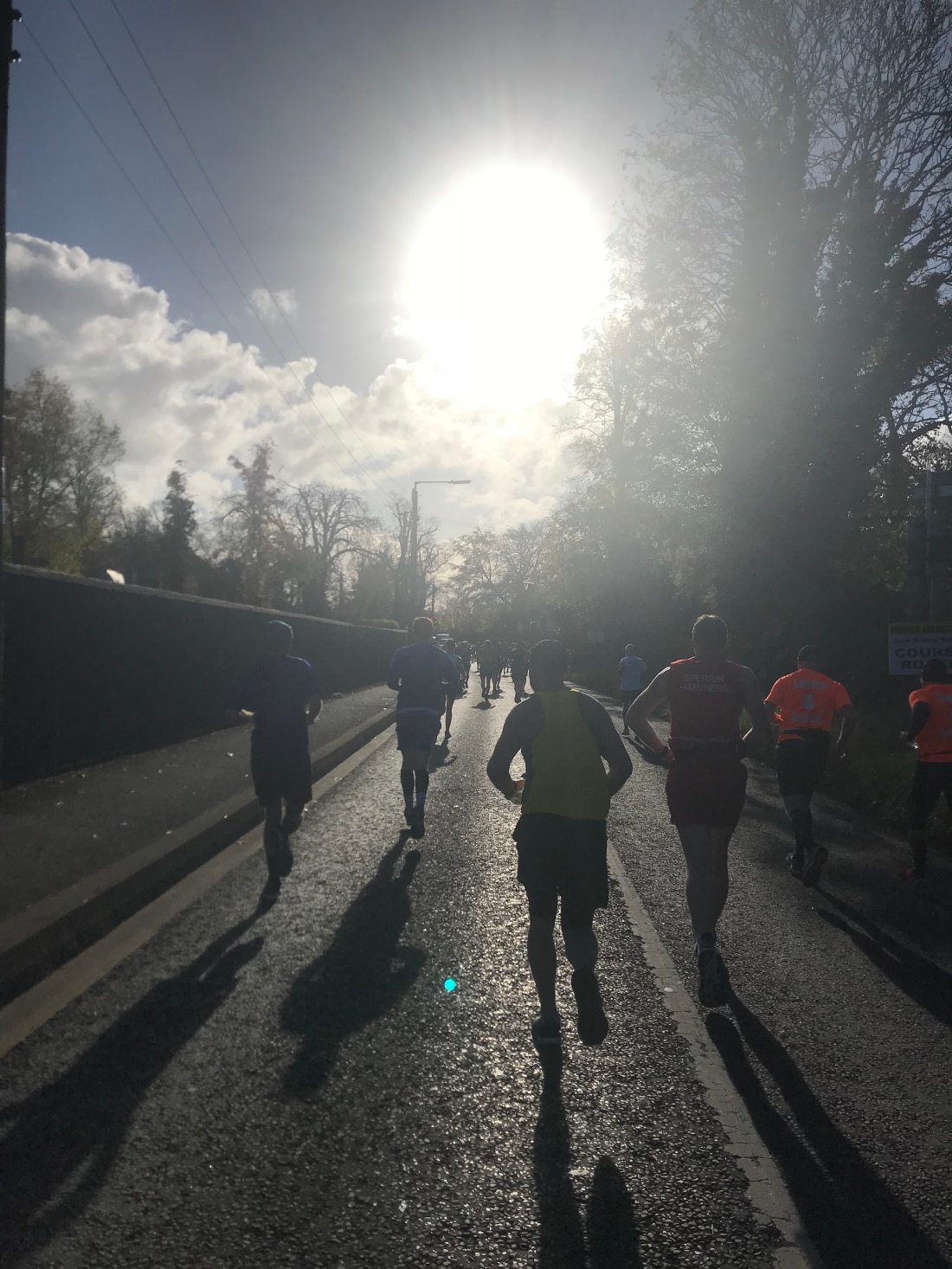 Like a wild animal that wakes up hungry and must chase down its breakfast, I head to the starting line of the Dublin Marathon. I’ve been on a zero-carb diet for three months and made the discovery on a training marathon, that my fastest, easiest marathon distance was when I hadn’t eaten for about 20 hours.

Arriving at the start line, I head to my allotted wave which is Wave 2. Wave 2 starts 15 minutes after Wave 1 and means your position in the results and gun time will be recorded as 15 minutes slower than it actually is. It also means, in my case, having to struggle my way, zig-zagging, around 3,000 people who started in Wave 1 (many of whom were walking).

Upon receiving the event notification that I would be in Wave 2 I felt myself immediately upset and contacted the organisers who told me they would only put me in Wave 1 if I could show them proof of a sub 1 hour 15 minute half-marathon. The logic for this, apparently, was because I said my target/predicted time was 2:30. Arguing my case that I had done 3:30 in the only other race of the year I had pushed myself, when I was also 2 stone heavier and hadn’t even trained properly, I was hung up on.

At about 6 miles in, I start cramping up in my calves for the first time in 3 months on my new diet; I’m thinking that I have a definite mineral deficiency. My diet consisted of meat, fish, eggs, cheese, butter and bone broth. I had no cramping issues throughout training, in fact my muscles felt stronger and more supple than they ever have and I ran more miles and recovered quicker than I ever have. However, I got lazy about making the bone broth, had none since my peak training week of 106 miles, three weeks earlier, and it’s just now dawned on me that this was an important part of my new diet.

On Clare Byrne live, a couple of nights prior to the race, a doctor was giving advice on carb loading before the marathon. I honestly think that is one of the most bullshit terms thrown around in marathon circles. A lion, tiger, or hyena does not wake up in the morning “carb-loaded”. They do not, the night before, fill themselves with shitty, health destroying processed crap and subsequently say “oh hey, I can’t chase down no antelope today because I forgot to carb load last night”. No, they get up and they run and if they can’t run faster than the slowest antelope they are dead. Period. “Carb loading” is not an option.

I make my way to the front of Wave 2, the gun goes off and I’m off at a good gallop. Upon glancing at my watch I see that I’m hitting sub 6 minute mile pace which is much faster than I had planned and so I slow it down to just under 7 minute mile pace.

The plan is to tip along nicely at around a 7 minute mile pace and then hit the nitrous after I’ve passed halfway.

My headphones on with upbeat music pumping in my ears I feel pretty good and think the day will go according to plan.

At the start of a marathon I am never sure if I’m going to get to the finish line. Like each year of your life you can never really be sure you’ll get to the next one in the same way you can never be sure you’ll get to the next mile. You can plan, you can train and you can hope for the best but that’s all you can really do. A pulled muscle, an accidental fall, anything could happen and your race is over. POW! Nice knowing ya. Sorry about ya.

At around 2-3 miles in I’ve already caught up with some of the Wave 1 participants which surprised me because I had accepted being in Wave 2 and assumed that those in Wave 1 were faster runners than me. The reality, however, is that many of them have never done a marathon faster than 5 hours in their lives. Laws and rules are needed but when they’re applied inconsistently it’s somewhat disconcerting.

After about 6 miles I feel like a running god and am already imagining describing myself as such in my blog post. I’m not actually that confident or cocky in real life but the funny thing about blog posts is that, even after all this time I find it weird that something I type into my phone while lying in bed can be viewed by anyone in the world with an internet connection. When I meet people and they tell me they know all sorts of things about me I feel a jolt of adrenaline such that one might get if one found out their diary had been read.

Anyway, I’m just about feeling good about my run when a crampy feeling spontaneously hits my calf. “I’m not going to finish,” is a thought that flashes across my mind. In a split second I go from feeling like a “running god” to feeling like a fucking idiot who thought he knew better than the carb loaders.

I keep calm and keep breathing and running, but over the next few miles my legs start to feel heavier and more crampy. “I’ve definitely screwed up my nutrition,” I think, but keep going but I just don’t have the same pop as I’ve had when on training runs.

Passing the halfway mark at around 1:31, I spot a chap ahead of me that has Vegan Runners on his singlet. I forget about all the crampy heavy feelings setting into my legs and feel a strong urge to laugh out loud. “Why in the name of Jaysus did I not get one that says Steak and Eggs Runner?” I ask myself. Tittering away to myself at my own stupid joke, I take a quick snap of him for my blog post.

The nitrous is broken. The switch will not flip. My legs are way tighter than they should be at this point in the race. Speeding up is not a realistic option and so I resolve to try and get sub 3 hours.

However, from halfway on I keep getting caught in some serious bottlenecks where it’s virtually impossible to get through. My rhythm is ruined and I’m forced to slow down.

I find myself practically elbowing through people at times and having to mount the footpath to jostle my way through the hoards of those that started 15 minutes ahead of me.

Hunger pangs hit me hard around this time which, like the cramps, was another issue I never had on my fasting training runs.

Acid hits the back of my throat and around this time I take a drink of water; it barely stays down and I’m close to puking it back up. From halfway onwards is an exercise in pain tolerance.

“Hi, Richard”, I hear and look up and see a cousin of mine. Light headed I struggle to think of what his name is but it just won’t come to me. Something is not right, I realise.

At around mile 20 I see a sign that says something like “You see, the wall is real” and I feel like whoever made this sign is taunting me. I’m a wall denier, you see. I always say that the wall is that place where you can’t run any further because you simply haven’t trained hard enough.

Looking at my watch I see I’ve started to slow to 8 minute mile pace and I am fading fast. “Fuck it, I need food,” I think, “ANY FOOD!” and in the next instant I spot a young lad offering a tray of jelly snakes. I grab two, thank him, and stuff them in my mouth. Then, at the next drink station I fire back two gels.

POW! I’m back in the game. The sugar gives me the jolt I need to get my mojo back. I had wanted to go the whole way zero carb but something was wrong, the chips were down, I was close to cramping up completely and the gels gave me the kick I needed to keep going.

Having been 3 months without sugar I can feel a strong kind of giddy jolt hit my brain and it also feels like my heart is suddenly beating harder.

While feeling my mojo return my body still feels heavy and the struggle to get through the last few miles is still very real. At this point I conjure up every little fucked up feeling I have ever felt. I think of every relationship I have had that failed, of every time I failed to live up to my own moral standards; I think of a cousin I spent a week beside as his life, at 37, faded from a virulent cancer that killed him within 2 weeks of diagnosis. I think of teachers that told me I’d never amount to anything, of being picked last for every team game at school because I was uncoordinated and shit at just about every sport there is. I think of the finite nature of life and how the flood is coming for us all. One day we’ll all be lying sick and dying in a bed somewhere; one day we’ll all lose someone important or have to leave someone behind that needs us; one day.

But today is one day. Today I am alive; very fucking alive; today I am running; today I went the distance; and today I am a winner, if only in my own head.

If you enjoyed this post and would like to help me create more then dropping a euro or two at the link below would be super awesome.