A car exploding into flame on my route down to Kerry for the Lakes of Killarney Marathon 2017 meant that traffic on the motorway was halted for about half an hour.

It always hits me as strange how there’s a giant, and maybe infinite web of interconnected and unfathomable occurrences which lead to every split second happening across the space time continuum.

Countless movies and books have been produced on the subject and, if you think about it every now and then, it’s fascinating, frightening and wonderful all at once.

I have no idea why the car exploded into flames or if anyone was killed or badly hurt, but I momentarily muse on the notion that the set of circumstances surrounding that car exploding followed a chain of events which led to it happening in much the same way as a myriad of circumstances led to me driving to Killarney at a ghostly hour to take photos of a marathon with no idea why other than that I felt a strong electrical impulse to do so.

Indeed, every single person who is going to this marathon on this specific and unique instant in time (unless perhaps the reality is that time, as suggested by the 80s tv show Quantum Leap, is actually a loop in which case we may have stumbled upon the origin of the word “loopy” in its use to describe somebody who has gone completely bat-shit-crazy, but as so often happens, I digress) is surely driven by a similar pattern.

Of course, everybody has their own individual reason for deciding to do this, on this particular day, and part of my reason for photographing and subsequently writing about it, stems from sitting in front of a 37 year old cousin in hospital and watching him die, virtually alone, of cancer over the course of a week, about two years ago. Prior to this happening I wrote pages and pages of thoughts, stories, and poems but never showed any of them to anybody for fear that people might think I’m a weirdo. It’s quite possible, and highly probable, that many people do find my writing weird and something to scorn and laugh at, but, to be crude, who gives a shit? Life is too short to not have pride in one’s eccentricities and the worst thing that can happen to you is not that folks think you’re a bit odd; the worst thing that can happen to you is that you die alone in relative obscurity.

And that is why I have come to love the running community. It is like a big family outside of my family, full of folks who are top-notch positive-vibers on a mission to feel happy and be part of something that makes sense in a world where, all too often, it is very hard to make sense of anything.

One of the first people to mention this marathon to me was Chris Grayson from the Kerry Crusaders. Himself and Fozzy Foristal are hopping mad, by which I mean that they are mad about spontaneously hopping into the air in the middle of running marathons which always makes for fun photos. 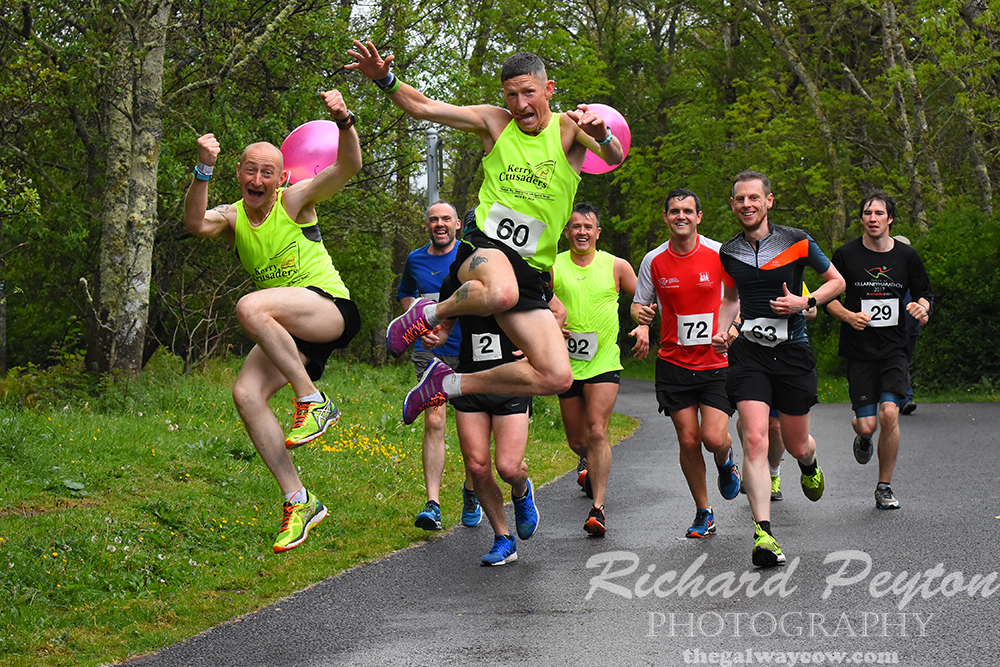 The Kerry Crusaders are a funny bunch and I think some of them actually believe that they are Usain Bolt, the real Usain Bolt, and that all the other Usain Bolts are just im-it-ating. 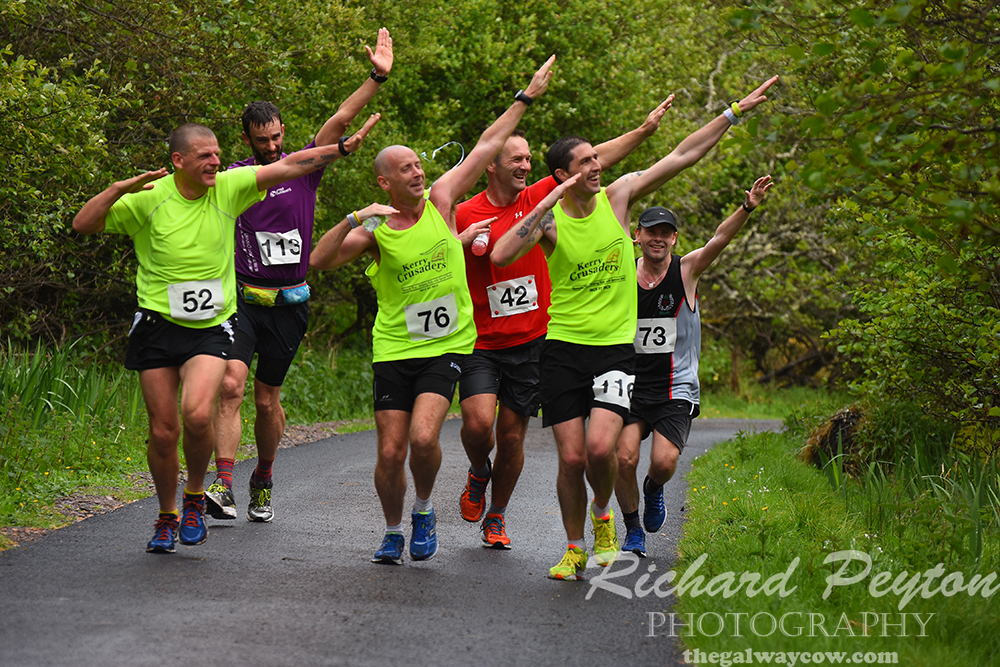 One of the most beautiful pair of runners on the road are Donna (organiser of the Achill Back to Back event in aid of Cystic Fibrosis, Ireland) and her boyfriend Francis who always provide fun material for our photos (and I say “our photos” because it takes a combination of your smiles and antics and my camera to make them that bit more special that what we would have if there was a robot camera taking them).

Anyway, I shall conclude by noting that even the soggy weather didn’t dampen our spirits on this day in Kerry, and sure it’s grand weather anyway; especially for ducks.