“What are you taking pictures for?” One of a trio of ladies asks me as she’s going by.

“Arrah, no,” she says, “but sure you can take our picture and put us on it anyway.”

So I do. (Photos will be here over the next few days)

I’ve barely arrived in Limerick and am instantly warmed by the manner of the local people.

About three photos in I spot a complete stranger setting up collapsible deck chairs and remark, thinking that having one would be much better than sitting on the ground, that I must get one (I meant buy one and bring it with me for such events).

“Here, take this one,” she says and gestures to the house she’s in front of, “we have loads inside.”

In just a few short minutes of experiencing Limerick, in contrast to my previous week in London, I’m reminded of how good it is to be Irish. Even with complete strangers one can derive an instant sense of homeliness and familiarity that one just doesn’t get in the sprawling metropolis that is London.

Don’t get me wrong, I love London, but one can’t help but feel very small and insignificant there, like a very tiny fish in a huge ocean of people who are all too busy to remotely notice you, never mind loan you the use of a collapsible chair when you need it.

Positioned 900m from the finish line, the participants come towards me one at a time and then in ever larger groups, but it’s nowhere near as intense as London, and my position is much better for taking the photographs that the runners deserve and that I can feel proud to say I took.

The friendly waves, smiles, and thumbs up are another example of the wholesome atmosphere that you just won’t get in London. It’s not that people there are not friendly, it’s just that there’s so many people that they just don’t see you. 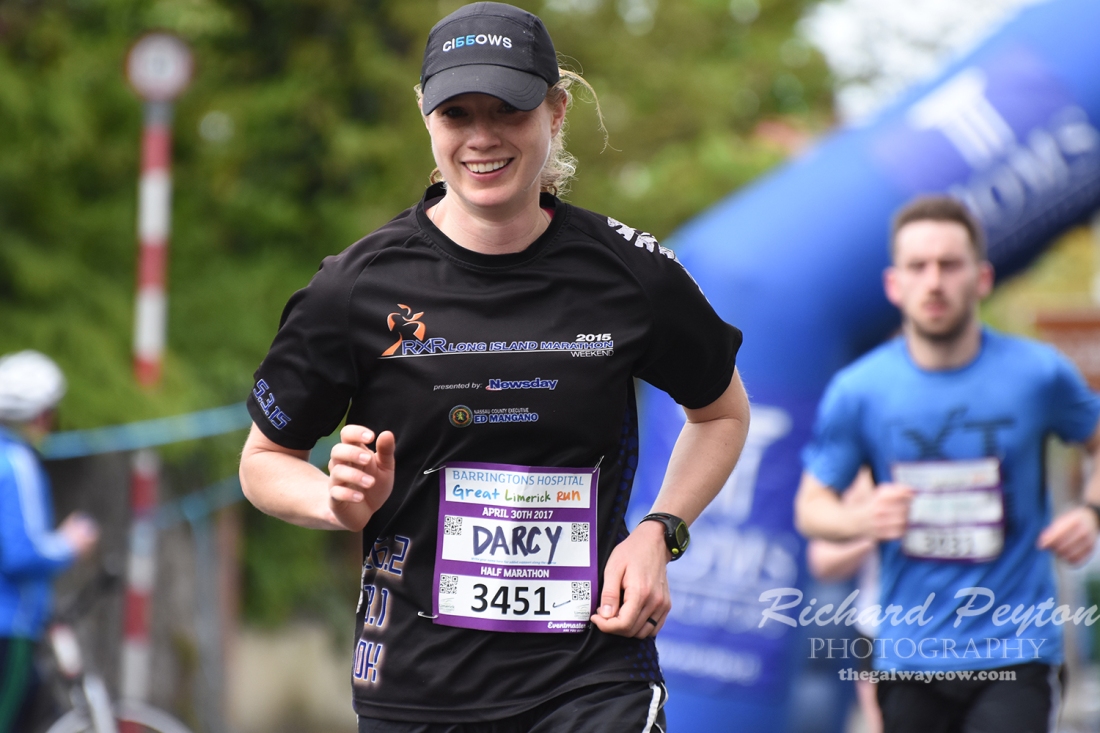 Two of the first familiar participants I spot are a lady called Rachael Stokes and a chap called David Toomey. They are both avid runners from a club called The Kerry Crusaders, which is in Kerry, I think. Every single person in that club is a joy. The only bad thing I could say about them is that their yellow, reflective club colours wreak havoc on my camera’s internal light meter which means photographs often come out a little darker than ideal. But it’s not all about my photos, is it? (And that’s what Photoshop is for ;-))

A man running for a hospice approaches and says, in a tone someone would use when referring to someone badly missed, “I’m running for him, for him.” He’s pointing at the picture of a man on his t-shirt. 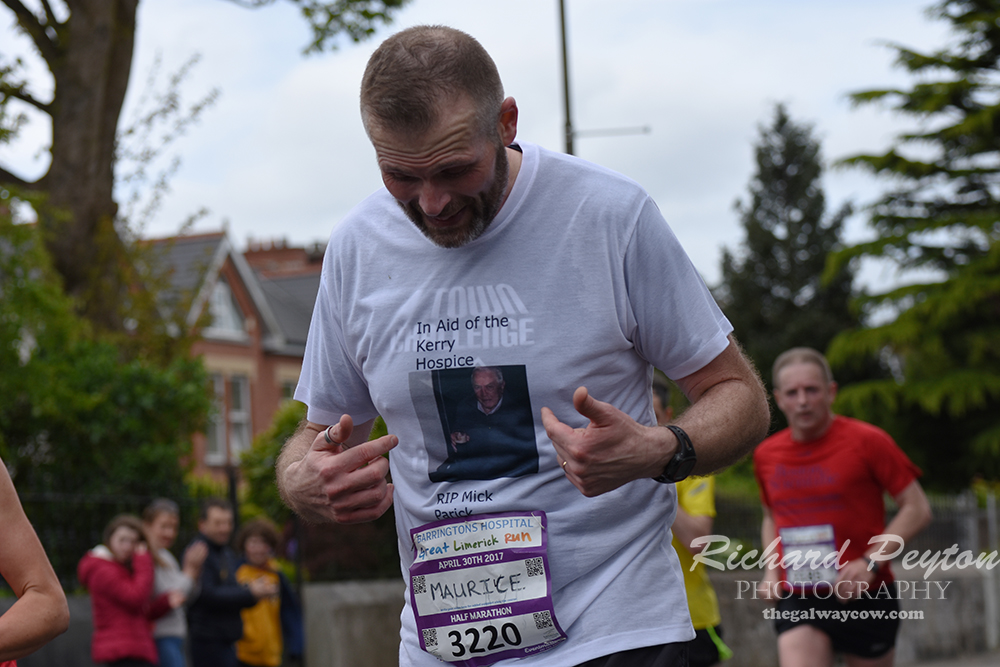 I can’t help but be moved by the man in the hospice t-shirt so I spontaneously resolve that, on the off chance someone wants any of the stupid amounts of photos I took, I’ll use any funds raised to support the charity COPE in Galway.

I feel running is all about being on a crusade to improve humanity. There are always people running for charities but even people just running for themselves are improving the human condition.

A person who chooses to run sends blood pounding around their body which triggers massive quantities of endorphins and makes them much more enjoyable to be around which can’t but have a positive effect on any one they encounter.

One only has to compare such an individual, post run, to one who has the frayed nerves and irritability of someone who has spent the night skulling pints in a pub to appreciate what I mean.

Anyway, the only thing I have left to say is that Limerick and The Great Limerick Run are, indeed, GREAT.
😉

P.S: I wrote this post on my phone in bed and will probably edit it later to add details like the person who won or maybe even some interesting moment I find in a photo I haven’t yet reviewed  😉