Impossible, I think, it’s going to be impossible for one man to photograph around 20,000 marathon runners in any meaningful way. But that’s why the prospect excites me. (Thousands of photos here).

My alarm goes off at 6AM and I wonder if there’s really any point in getting out of bed to attempt to photograph the 2016 Dublin City Marathon.

Several photographers I know keep telling me that photographing these kinds of events is a complete waste of time and mainly just good for prematurely trashing your camera, so there’s a little war going on inside my head as to whether to head to Dublin or not.

However, a feeling of emptiness fills me at the thought of not going to photograph it, a feeling of failure at not following through on an idea that’s been brewing in my head for six months and so I spontaneously resolve to jump out of bed, walk my dog, intravenously inject some caffeine (haha) and hit the road with this strange compulsion.

Like a bank robber that’s resolved to do one last big job, I resign myself to the task at hand.

Arriving at Heuston station at around 9.30AM, I load up my weapons of mass photography and am convinced that today will be the day that my equipment will fail catastrophically since, according to an online database I found, the average shutter failure rate of my camera is around 58,000 shots which is where it is currently at.

I position myself around a mile from the finish line at Merrion Square about 20 minutes before the first competitors cruise towards me.

I spot at least four “official” photographers as I trace backwards along the route of the last mile of the race. I know they are official because it says so on their high-vis vests.

It used to unnerve me that I was the unofficial photographer but now it fills me with a great source of pride.

Being the official photographer means you are bound by certain restrictions and have to do things in a certain way.

Being the unofficial, or pirate photographer as I like to think of myself, means I can do whatever the hell I want. I can even make all my photos pink if the mood takes me. It is the ultimate freedom of the outlaw, the man on the run, the man who lives outside rules, regulations, and restrictions and he is in essence a free man, a free man who is yet to make any money out of his work, but one which would rather be poor and enjoy the sweet taste of free air than be rich and have lungs filled with the wrank smog of adhering to rules which crush people into moulds designed to make them as uniform as a mass produced object that comes off of an assembly line.

Obviously being an official photographer would have the benefit of actually getting paid but I think the benefits of being such start and end there. They are contractually obliged to be where they are and I, like all 20,000 participants, am here as a free man of my own free will.

Before long the first wheelchair athlete comes towards me his focus and speed are incredible as he swishes past me like someone on a triathlon bike rather than someone in a wheelchair.

Shortly thereafter, the first runner comes bounding towards me, I frame the shot, focus, and then I hit the button but the shot goes out of focus, and I realise I have my camera on the wrong focus setting and completely miss the shot of the leading male runner. Ooops! Just missed the money shot!

The day goes by in a crazy flurry with the largest herd of runners I have ever seen coming towards me.

Throughout the race I hear some people say “Galway Cow” but I have no time to look or acknowledge them as I’m totally overwhelmed by trying to get as many shots as possible.

There are some great costumes throughout the day and some really funny encounters with people. One of the craziest costumes was someone wearing the Eiffel Tower. Another absolute smasher was someone who had a costume that made the person seem like a leprechaun was carrying them.

One of the few familiar people I spot, that I have come to realise is a out-and-out runaholic, is the lady below. Her ability to run is matched in equal measure to her extraordinary sense of humour and since becoming her Facebook “friend” I have spent many moments almost water-damaging  my phone with the laughter tears that her posts always give me. Her name is Mary, just like the mother of Jesus. 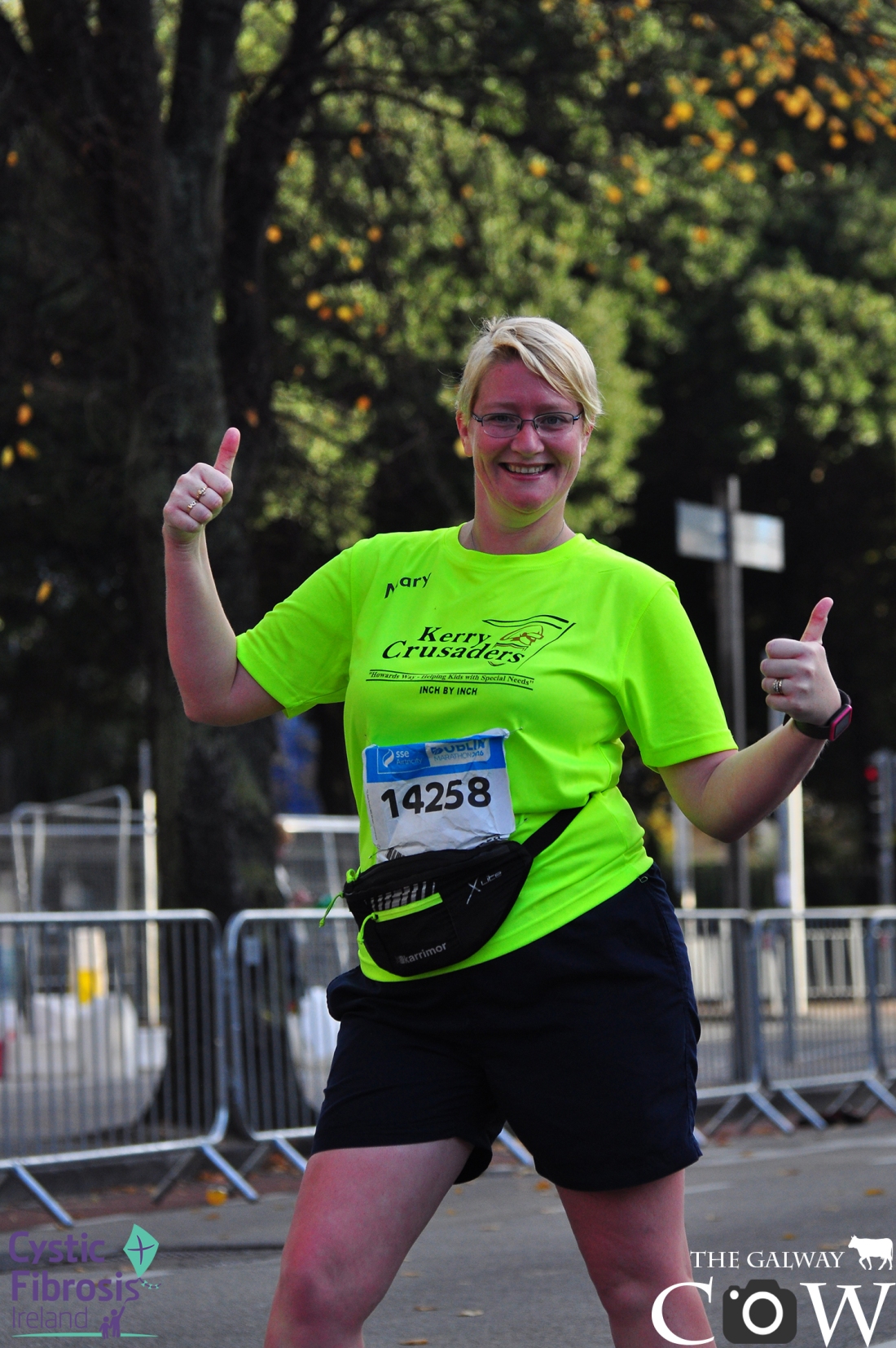 Five or six hours of photographing the marathon go by in a blur and I can barely feel, or straighten my hand.

I have to start heading back to Galway by 4 so have to regrettably call it a day a bit before the last finisher goes over the line.

Homeward bound, I have a strange feeling like I’ve achieved something great today even though I haven’t really.

In this city 100 years ago this year a small band of Rebels positioned in the GPO took on the inexorable might of the British empire in the epic struggle for Irish independence. 100 years later, a lone cow took on the struggle of single-handedly photographing 20,000 people running a marathon. It’s hardly comparable, but at least I won’t be facing the firing squad.

Perhaps 100 years from today schools will teach the history of the 2016 Halloween Rising of The Galway COW in his fight for the freedom from the tyranny of conformity…..or perhaps not. But such totally off-the-wall fantasies brighten up my day.