“Vroom, vroom, vroom,” say all little boys with their car toys just about as soon as they manage to crawl and clasp their little fingers around them.

And so, seeing an exhibition at The Galway Plaza in Kiltullagh of life-sized toys that really go “vroom, vroom” at the push of a pedal is a must see thing for fully grown boys who are now, technically, men.

Plus, all funds raised are for Temple Street Hospital and the Brothers of Charity, so the boys can enjoy themselves content in the knowledge that they are being altruistic in their appreciation of these colourful and powerful machines.

Arriving in Kiltullagh, adrenaline is pulsing through my veins like petrol being injected into a turbo charged engine of which the accelerator is fully depressed.

I’m here to admire these machines, to talk to some of the owners, and take a few snaps in the process. Perhaps I’ll learn something or perhaps I’ll just spend an hour or two shouting out loud and appreciative WOWs!

Lines of Supercars, Vintage Cars, and Boy Racer Cars are strewn all over the place and the first chap I speak to, Adrian of Midnight Limos, is the proud owner of three of them. The most impressive one, to me, is his Sheriff vehicle and I can’t help but be reminded of the Dukes of Hazard.

The next owner I chat to is a man called Vincent Ryan and he is the proud owner of a 1961 Austin Metropolis and has his lady in the passenger seat.

“Modern women much prefer to do the driving,” I say to her. 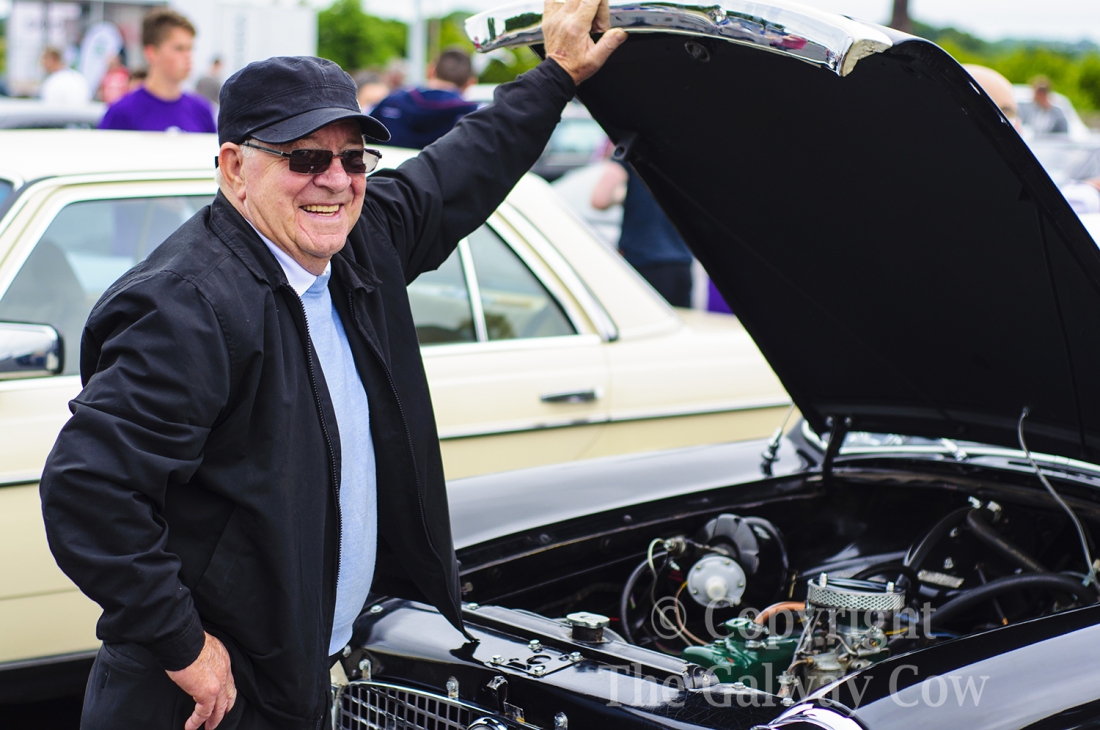 “Oh, not me, I much prefer to be driven,” she says, and I am impressed by her ladylike composure.

I scoot round all the cars and get a snap of all of them, and some of them are, quite simply, sex on wheels. Check here to see for yourself.

Just when I think I’ve seen it all, I see a chap pull up with his lady in a vehicle which looks like the perfect solution to surviving a Zombie Apocalypse and I feel I simply must talk to the him, so I do.

Unfortunately, while he agrees with the suggestion of its suitability for survival, the intention of having it covered in aluminium panels isn’t remotely as exciting as I was hoping for. Apparently he takes it off road a lot and it saves him the bother of worrying about his paintwork.

A yellow Lamborghini is one of the highlights of the day and I get a chance to talk to local car vendor Adrian Quinn who tells me it could be mine if I call up and see him. I tell him that unless it costs in the region of fifty euros or I win the lotto then I won’t be seeing him again any time soon. Here he is with his good lady wife.

One of the last gentlemen of the day that I speak to is a man called Colum who is the owner of a 1979 Rolls Royce and he proudly insists I sit in both the front and the back. In the back he points out a handy little mirror which he says is useful for the ladies.

His partner is in the front seat and I cheekily suggest that his Rolls must be a good way to keep his hands busy when she’s not around.

“It keeps his hands busy even when I am around,” she says, and we all three laugh.

Towards the end of the day my jaws are aching from all the chatter with car enthusiasts and on reflection I realise that the only thing I learned today is that boys will always be boys that like toys but as they age their toys get more expensive.

To conclude, here’s a photo of the organiser, and father of Luke and Chloe, with his buddy James on the left.