I have no interest in flowers, whatsoever. But I’m open-minded and think that going to Bloom 2016, in Phoenix Park, could be a delightful experience that may well alter my perceptions and infuse me with a new found interest.

The day is boiling hot and I arrive at the entrance with my t-shirt already half-soaked in sweat and I nearly puke when I’m told it’s 20 euro to get in.

A cheeky part of me was going to chance getting in free under the premise of being a member of the press which, in my own modest way, I am, but the suffocating humidity has zapped all daring notions from my brain and I reluctantly hand over the cash.

The first thing I see on entering is an art display of a bronze man looking at a gigantic pile of oranges. Its meaning is beyond my comprehension until I read the description plate from which I firstly learn that it costs a modest €48,000. It is called “Mandarins & Thinking Men.” The mandarins apparently represent nature “which is bigger than man,” but the main thing I’m thinking is how anyone could be so stupidly rich as to be able to afford this. I imagine it in my garden and am instantly irritated by the idea of trying to manoeuvre the lawnmower around it. 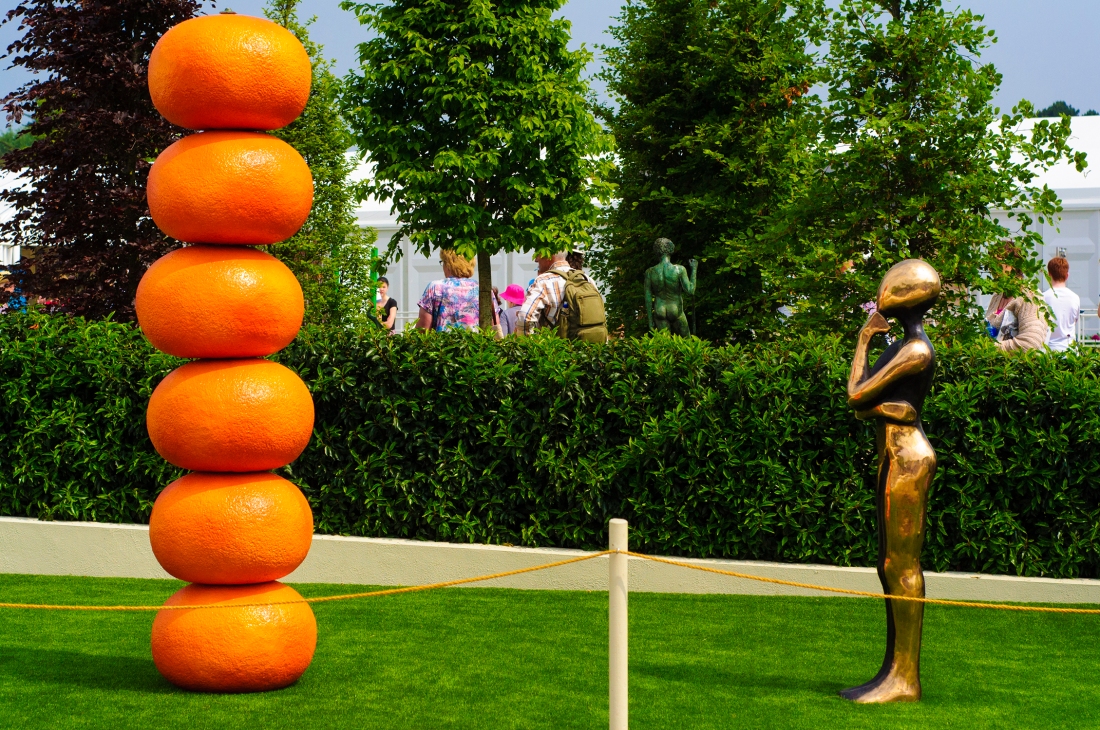 I know I shouldn’t, since I’m already dehydrated, but I buy a cup of coffee for €3 and then enter the first tent.

Determined to get a few nice photos I furiously photograph a wide variety of colourful flowers. I wanted to photograph some people as well but everyone seems to be hot and bothered, shuffling around, miserably, trying to enjoy themselves and the only time I spot people smiling is when they are photographing themselves with their phones for their social media accounts. In the first 10 minutes I hear several couples either snapping at their kids, each other, or both and I’m a bit relieved to be alone.

As I wander around I see lots and lots of people selling and promoting themselves and nobody really looks like they’re enjoying themselves or selling much, apart from the ice-cream men who all have massive queues.

Outside the first tent the air is nauseatingly infused with the smell of BBQ meats. I trundle onward, see a few unremarkable garden displays,  and eventually come upon a magic show by a chap called Billy Bubbles and I think this could be an interesting chance to take a few photos.

One of the first things he does is to get the kids to call out his name. He gets them to say it on several occasions and I’m sure they will remember him when it comes time for their parties. But after about the fourth or fifth time of his doing this, with no magic starting, I get cheesed off and move on. Still, I’m sure any kid would love to have this performance at their birthday. 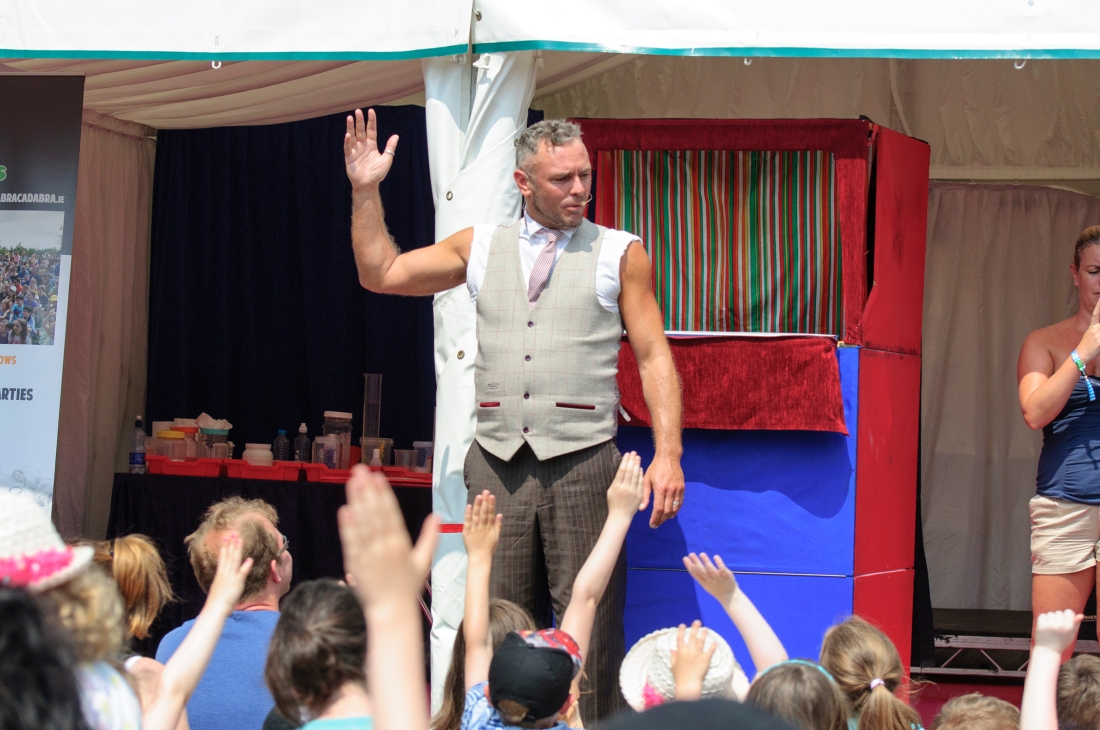 The next thing I come across is a tent for RTE Lyric FM. It’s nice and cool in here, so I stay for a bit and get a nice photo of George Hamilton and a free pen. Yay. As you can see he emanates a pleasantness which perfectly matches his role as a classical music presenter.

Onward I trundle and I come across a bunch of guards playing jazz. There’s not much to say about that really, but it was nice. 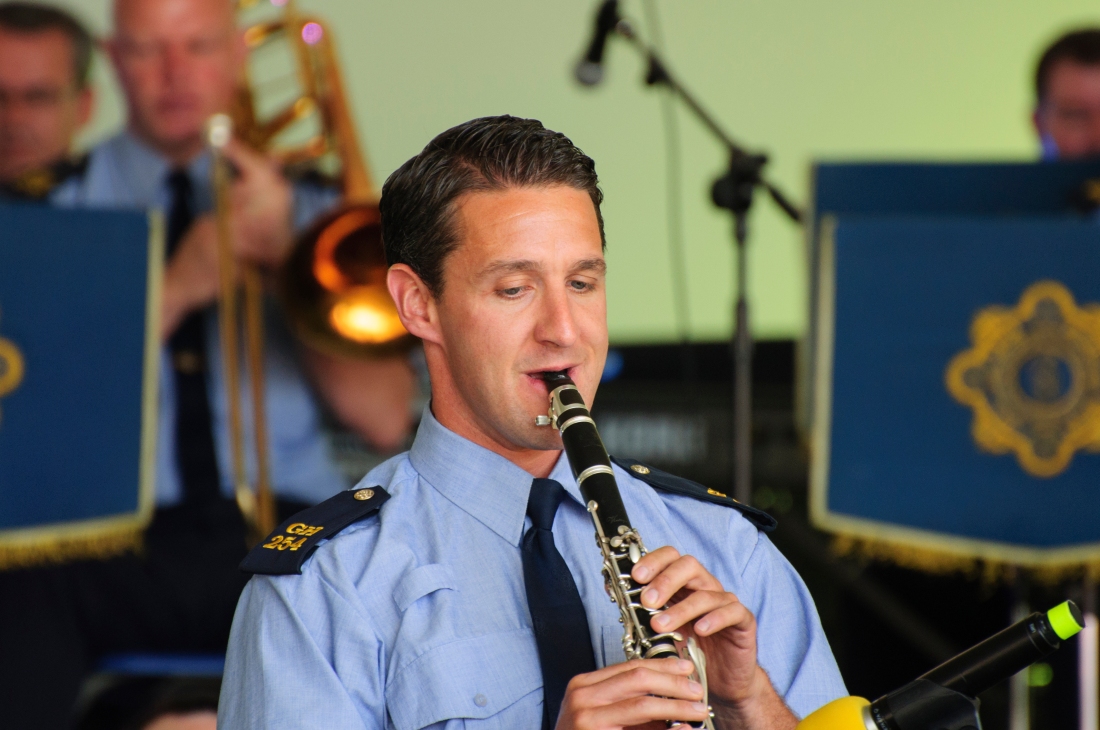 Next stop is Nevin Maguire doing a cookery demo and I decide to take a few snaps of that. Every second sentence is a product placement and he says he’s very happy to do such promotions.

At this point several hours have gone by, I stink, my t-shirt is sticking to me, and I feel a bit shaky from all the coffees I’ve guzzled. But I soldier on and catch the start of a Debenham’s fashion show and crack off over a hundred photos. I’m not terribly interested in ladies’ fashion, but I do find beautiful ladies strutting and posing their way down a catwalk to be moderately appealing.

The last objective of my Bloom visit is to photo some of the vendors and I end up chatting to a man who, when not flogging fuchsias, is a genealogist and, as it transpires, enjoys a good conversation. He tells me lots of interesting things like how he does surveys on graves and how you have to photograph them in the morning on account of a tradition, originating from Roman times, of having them point east. He also informs me that ancient Ireland was a savage place before the Normans arrived, with people going around blinding each other and behaving in a most uncivilised manner. Interesting chap. His name is John Nangle. Here he is:

At this point it’s about three, and I decide I need to get out of this sauna-like den of capitalist pursuit. All this florid commercialism is not the real Dublin, I think. And I irritably resolve to hit the streets to discover as much of it as I can over the next 5 hours.