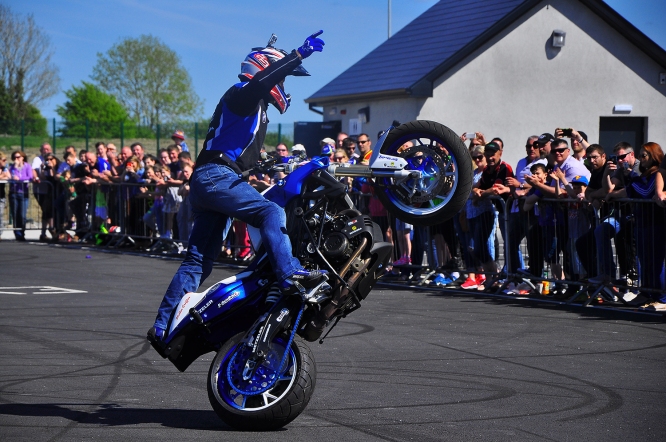 Burning rubber scented the air from what seemed like a hell-fuelled, gravity defying engine ridden by Galway man Mattie Griffin. Stephen Hunt immediately sprang to mind when he said, “If you’re not living on the edge you’re taking up too much room.”

This was no place for anybody with a heart condition as the energy was such that I could feel mine pounding in my chest. Mattie and his stunts were like an inexorable force of nature with a steel edge. I can say, quite positively, that he not only had his hand on the throttle of his motorbike but that he also had it on the adrenaline reserves of everyone present.

Close to me in the crowd I heard an offended sounding little kid, of maybe 5, say to his father about Mattie’s stunts, “He’s just copying what I do on my bike! Daddy, why were you giving out to me and saying that it was dangerous?” His father replied, “Because it IS dangerous.” With lightning speed such that I’m sure would have impressed Mattie, he retorted, “Well, why is he doing it then?” His father neglected to reply.

Each stunt was better than the last. And, just when we all thought it couldn’t possibly get any more thrilling, it did. Pat McDonagh, owner of the Supermac’s chain, came into the makeshift arena and, quite literally, put his balls on the line. Being one of the richest men in Ireland, one would think that he wouldn’t be putting himself at such risk, but I guess this kind of attitude is what makes him the outstanding entrepreneur that he continually proves himself to be. In my head I’m thinking: One burst tyre, one snapped brake cable, and Mr McDonagh could be crippled for the remainder of his life. Thrilling stuff indeed!

The next stunt involved Mattie requesting a volunteer from the crowd and an aesthetically pleasing lady with flowing hair calmly obliged. He circled close to her on his back wheel followed by driving towards her at speed, stopping at the last moment and tipping forward to give her a smacker on the lips that made the crowd go wild!

Finally, and thank God it ended here because my little heart was fit to burst from excitement at this point, Mattie revved the hell out of his bike and did an acrobatic style forward flip over the handlebars.

He then, in the spirit of true showmanship, proceeded to do one more circuit on his bike, high-fiving a truly delighted crowd whose last thrill of the day was getting their palms slapped by a real-life HERO.

To see more photos from the event please visit the Facebook page by clicking this link.