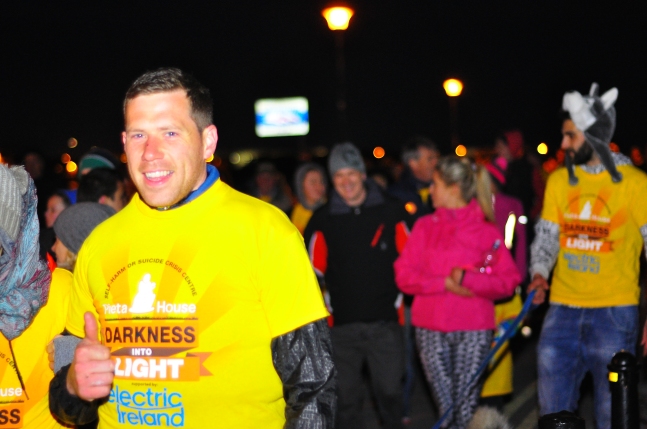 Zombie-like, at 3AM this morning, I got under an ice-cold shower to wake myself up so as to photograph Pieta House’s darkness into light walk/run. Pieta House, for anyone who may not know, is an organisation for raising awareness about suicide and helping people to steer a path out of their own personal darkness into a world where reality seems brighter and more joyful.

I have just returned home with a woeful amount of seriously crap shots of the event, especially the first few, and it occurs to me that my failures with this is kind of symbolic of what the Pieta House darkness into light event is all about.

Anyone who has ever tried to capture sports photos knows that it can be challenging and that you need a fast shutter speed to freeze the action. The problem, in low light, is that you cannot use a fast shutter speed because of the fact that it won’t let in enough light. Therefore, you must use a low shutter speed, but the problem with that is that the subjects in your photos will wind up being a blurry mess. The only solution I can think of is to use a flash, but that has a limited range.

In position at 4.15, at the Claddagh, I’m ready to start taking photos when I encounter my first problem. I’ve wasted all of the power in my external flash by taking test shots. The first two participants run past as I, with cold and numb hands, try and replace the batteries. I eventually manage to get replacements in but end up with mostly terrible photos of the runners. However, by the time the walkers come along I’ve got into the swing of it and realised, all too late that I should have targeted my lens for a spot that was illuminated by a street lamp. Doh.

Having just perused my photos of the event, I’ve realised that it is a lot easier to keep things in focus when they are moving slowly and that life is a bit like that also. Often, one is running around trying to keep to deadlines and schedules and we lose focus of what’s truly important. Perhaps, when things are getting us down, what we really need to do is slow everything down and try to focus on the positives. That’s obviously infinitely easier to say than to do, but I like the metaphor nonetheless.

Anyway, I had planned on scrapping about 90% of the photos I took but decided to put them up regardless of the fact that most of them are rubbish. Sometimes I think a huge amount of depression could be avoided if we all stopped worrying about what other people think and trying to live up to some obscure idea of perfection that doesn’t exist anywhere but in nauseating, idealistic Hollywood fantasies. While, in many ways, I consider my photos of this morning a failure, I think of Michael Jordan when he said “I have failed over and over in my life, and that is why I succeed”. It doesn’t matter that I screwed up this time. All that matters is that I’ve learned something from the experience and that next time I photograph such an event my photos will be that bit better until one day they are as perfect as is possible for me to make them. One can either be paralyzed by one’s failures or made stronger by them.

Finally, I’d just like to say that this morning’s experience was quiet magical and I hope that I captured some of that positive energy through the lens and that you, dear reader, get infused with a little bit of it. The fact that some 4,000 people, in Galway alone, went out walking/running at an ungodly hour, shows that there are a tremendous amount of people out there who care, will listen to, love you, and want to help you on your journey from  darkness into light.

2 thoughts on “My Pieta House Failure”